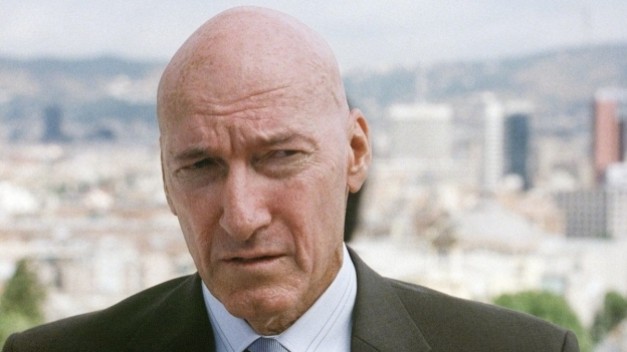 Honestly, there's never going to be a reasonable time to tell this story so I might as well do it here. When I'm not writing about Charles Bronson and Hollis Frampton here at The Pink Smoke, I program a three-screen arthouse/repertory theater in Westchester NY called the Jacob Burns Film Center. In terms of a general job description, that means I select the movies we show - it's kind of like being a museum curator, but with le cinema. I've been there about a decade and in early in my career, we did a Jeff Bridges retrospective revolving around an opening night featuring Mr. Bridges himself doing a Q&A after a screening of the weird Streetwise fictive pseudo-remake American Heart. I didn't curate the series in this instance - I was given a list put together by the film critics Janet Maslin and Marshal Fine (who were the ones responsible for bringing Bridges to the JBFC) of a dozen or so Bridges movies and my job was to track down prints and book them for our screenings. For some reason, people assume that sort of thing requires almost no effort. In fact, trying to find rights and materials for films is the most difficult part of my job. Spend a couple weeks hunting for the rights-holder and a 35mm print of American Success Company, American Heart, The Last American Hero or some other Jeff Bridges film without "American" in the title and you'll understand what a supreme bitch this process can be. I had so much trouble finding several of the films on the Maslin/Fine list that the decision was made to enlist Jeff Bridge's help in locating one or two of the more obdurate inclusions. I was fairly new to this line of work and didn't yet understand just how useless it is to ask someone like Jeff Bridges (or Clint Eastwood or Jonathan Demme or any number of competent, intelligent cinematic icons) where to find copies of their work. Why should they have any idea? But what the hell did I know. It seemed like a sound idea at the time.

So, they get back to me and say, "Here's the phone number for a friend of Jeff's. Jeff is really confident he'll be able to help you out." Great! This is awesome. I call the guy up and he's a sort of rambling, unfocused middle-aged gentleman who pauses frequently while talking. We chat for a bit about the main title I just can't get my hands on: The Last American Hero, a mostly forgotten 1973 race-car drama based on some Tom Wolfe articles. Fox's repertory service company, Criterion (no relationship to the Criterion Collection) should clearly have the film (and I can't remember the specifics) but for whatever reason they don't. And this guy I'm talking to about it, he seems like a perfectly nice guy, but not some dynamo insider who's going to have the solutions to my problems at his fingertips. I tell him about the Fox/Criterion situation and I feel like I've already lost him. I can't imagine why they sent me to him. So imagine my surprise and delight when he calls me up a week later and says "Chris, I found that film you're looking for!"

"They have it at the Blockbuster Video right down the street from my house! Now, I'm out here in California, but I suppose I could still mail it to you, if you guys are willing to take responsbility for the late fees."

That's alright buddy. Thanks for trying.

So, I go on to relate this ridiculous story to Paul Cooney and when I get to the point where I say, "So they give me the phone number for this guy named Ed Lauter and -"
"Ed Lauter? From B.J. and the Bear?"
"I'm pretty sure they didn't give me the number for a monkey. And if this guy was a monkey, I guess I take it all back - he did a really amazing job all things considered."
"No, Ed Lauter played the sheriff guy who was always trying to shut them down."
"I've never seen the show."
"Well, this guy's in fucking everything."
"Sorry, I've never heard of him."
"Keep your eye out for him - you'll see him in a million movies and t.v. shows, probably one tonight if you watch anything made after 1970."

That, my friends, is the story of the time I searched in vain for a semi-forgotten Jeff Bridges movie with the assistance of a comically inept Ed Lauter without even realizing it.

Later on, I finally saw The Last American Hero - and here's the thing: Ed Lauter is in The Last American Hero! And he didn't stop me from explaining it to him! He acted like it was the first he was hearing of it, the crazy Tom Wolfe-based race-car film. I guess he was just being polite and if I ever get famous he'll tell a mildly amusing anecdote about the time he sat patiently on the phone with me as I gave him the gist of a movie he was in.